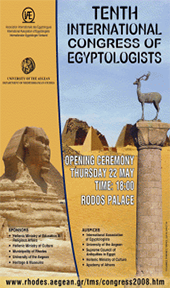 From the welcome message of Prof. Christopher J. Eyre, Former President of the International Association of the Egyptologists, May 2008:

“In accordance with the decision of the General Assembly of the International Association of Egyptologists, during its session in Grenoble, on 10 September 2004, Egyptologists from all countries are cordially invited to take part in the Tenth International Congress of Egyptologists, which will be held in the island of Rhodes, Greece, from 22 to 29 May 2008. The development of Egyptology as an academic discipline in Greece in recent years, and in particular in our host institute the Department of Mediterranean Studies of the University of the Aegean, has impressed me greatly, both personally and academically. I have personally supported taking the Congress to Rhodes, since the promotion of academic Egyptology world-wide is a core purpose of our Association. This raises the academic profile of the subject in an area where we are a recent, but strongly expanding subject in the academic programme, and emphasizes the importance of Egypt in the history and heritage of the whole Eastern Mediterranean. I believe that the extremely pleasant and historical island of Rhodes, situated at the crossroads of two major sea routes of the Mediterranean between the Aegean Sea and the coast of the Middle East and Egypt, will be the ideal meeting point for Egyptologists all over the world. It can provide us with the concentrated facilities for a really effective academic programme, in the best of surroundings.”