The AEgySca Project aims to study the archaeological context, the iconography, and the geographical distribution of Egyptian and Egyptianizing scarabs in the Aegean through data collection, in order to trace the role of scarabs in cultural interaction between Egypt and the Aegean in the 8th-6th c. BC. It will also focus on typological analysis of the so-called “Lindos-Perachora” scarabs from significant sites (i.e. Perachora, Argos, Ialysos and Lindos), so as to shed more light on their origin and manufacture.

The purpose of this postdoctoral research is to study and underline the unpublished linen and woolen Coptic textiles, which are dated from the 3rd century AD to the 13th century AD and originated from non-spatially Coptic burials. In the present research, the material will be analyzed on artistic, technological and social level in order to trace habits, traditions, morals, ideas and perceptions in everyday life and thus investigate the continuity of ancient Egyptian culture in the Coptic period.

The Ancient Egyptian Demonology Project organized and coordinated by Kasia Szpakowska (Swansea University, Wales), Rita Lucarelli (Bonn University, Germany) and Panagiotis Kousoulis (University of the Aegean, Greece), with the collaboration of distinguished scholars from eight institutions. The aim of this ambitious, trandisciplinary research project is to study certain lexical, iconographical and chronological criteria for the formation of a category or categories of beings that could be mapped together and systemized to become a “demonology” within the cultural framework of Ancient Egypt. The time span covered is large (from the Old Kingdom through the Roman Period, roughly 3000 BC-AD 400) as are the source materials. 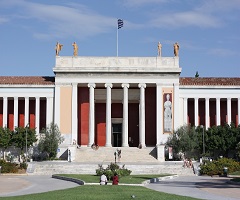 This international research project is organized and coordinated by Eleni Tourna (Curator of the Egyptian Collections, National Archaeological Museum of Athens) and Panagiotis Kousoulis (University of the Aegean) and aims at a thorough examination and analysis of the Egyptian magical ideology and practices through the complete study and publication of all relevant objects from the Egyptian Collection of the National Archaeological Museum of Athens. The first monograph of the project examines aspects of apotropaic and prophylactic magic in the afterlife with a special focus on the Twenty first Dynasty yellow coffins from Bab el Gasus.

The Aegyptiaca Project (AeP): Ecumene and Economy in the Horizon of Religion was inaugurated in 2006 as an International Collaborative Project of the University of the Aegean and the University of Bonn. The Project focused on the Rhodian Aegyptiaca, the Egyptian and egyptianised donations from the archaic Rhodian sanctuaries, and their economic and socio-political implications. Since then, the Project has been further expanded to study and re-evaluate all religious and social semantics of the Egyptian presence in the Early Iron Age Greece and the eastern Mediterranean.

Investing in knowledge society through the European Social Fund funded by the European Union (European Social Fund – ESF) and Greek national funds through the Operational Program “Education and Lifelong Learning” of the National Strategic Reference Framework (NSRF). Project title: “Hybrid demonic entities in Egypt and the Aegean during the 7th and 6th c. BC” (PhD canditate: Ms. Electra Apostola)

The Project aimed at the development of the research cooperation among scholars in the University of the Aegean and was co-funded by the European Social Fund (75%) and National Resources (25%) – (EPEAEK II) PYTHAGORAS.

Project title: “Egypt-Greece in Antiquity: a historical and archaeological survey with the aid of natural sciences”.

Part of the Project was the Helwan Archaeological Survey and Mapping Expedition, which was organised and coordinated by Panagiotis Kousoulis (University of the Aegean, Rhodes) and the Supreme Council of Antiquities from 2005 to 2007. The aim of the project was the survey and digital mapping of momuments in the Helwan region.