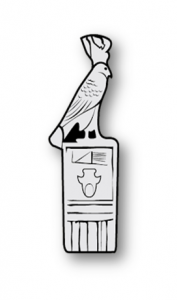 In the absence of adequate written evidence the history of contacts in the eastern Mediterranean during the Geometric and Archaic periods is largely based on our knowledge and evaluation of imports and their archaeologically visible influence in indigenous material horizons. These imports are often examined alongside patterns of transmission of technology and craftsmanship, in an attempt to understand the gradual orientalisingawakening of the Aegean that reached its apogee in the 7th century BC. Egyptian iconography reached the Greeks via two main channels of communication or cultural networks: direct contact of Greeks, mainly from the Asia Minor and East Greek areas with Egypt, and via the intermediary of Phoenician artifacts, that spread all over the Mediterranean during the orientalising and archaic periods and linked the Syrian/Phoenician coast to Italy and Sicily. In addition to that, the establishment of a Greek colony at Naukratis, in the Egyptian Delta, facilitated to a great extent an undeniably great impact on one civilization to the other, which went both ways, at it is revealed in a variety of artistic and literary modes.

The AeP focuses on the religious Aegyptiaca, the Egyptian and egyptianising objects of a religious nature from the archaic sanctuaries in the Aegean and mainland Greece. The importance of these objects within the development of the Greek culture is obvious from the fact that they generated a cultural wave of Egyptianisation. The scope of this project is to investigate the religious semantics of these donations and to re-evaluate the Egyptian cultural values in the Aegean world during the first half of the first millennium BC.

The functionality and contextualization of these objects within the broader nexus of the international relations of the seventh and sixth centuries BC, must be seen as an epitome of the continuous attempts by the Saite kings of the Twenty-sixth Dynasty to re-establish a political and social link with major cultic centers in the Aegean and the Levant. Although no information on the ideological component of these votive offerings survives, the locally manufactured egyptianising objects clearly exemplify that Greeks had gained insight into Egyptian religious beliefs. Thus, they were probably familiar with the significance of at least some of these objects and the magical connotations they carried. Even if theseobjects were not used in the precise manner that they should have been back in Egypt, they were regarded as highly precious and venerated objects, having been assigned a whole new function and identity within a different cultural environment. The objects themselves have not been changed; only the nature of its reception – to Egypt they were exports, while to Greece they were imports – and possibly its status and worth. They were adapted to the international syncretistic religious background of the receptive culture. The importance of the Aegyptiaca within the praxis of the Greek culture is obvious from the fact that they generated an enormous cultural wave of egyptianization in the Aegean world. Rhodes is the place of the strongest Egyptian impact on the Greek material culture and thus probably the mentality too. Especially for the production of Egyptian style faiences a Rhodian workshop is well known.

Our initial research on the votive offerings from the Rhodian sanctuaries is now further expanded to cover all Aegyptiaca of a religious nature from the Aegean and mainland Greece of the 7th and 6th centuries BC. The great majority of these objects are somewhat related to the sacral field, but not exclusively restricted to it. Right from the start we can notice a complex interplay between the sacral, the political and economic field. In general, we can distinguish four socially different types of sacral Egyptian/egyptianising donations. These semiophores may be: stately Egyptian, private Egyptian, stately Greek, private Greek. Predominant among these objects are faience figurines in the shape of Egyptian divinities, demonic entities (e.g. the lion-headed dwarf-god/demon Bes), hybrid animals and symbols.

The proposed project seeks to continue and develop further this research in a more structured way. More specifically, it aims at: