Interaction of ideas, symbols and cultures in the Southeastern Mediterranean from the 8th-6th c. BC: Hybrid and theomorphic entities of Egyptian origin in the Aegean world. 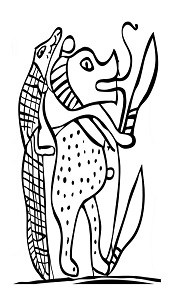 This thesis attempts to investigate cultural contacts between Greece and Egypt in the 8th-6th century BC, by studying interaction and diffusion of ideas and symbols of popular religious ideology and practice. The research focuses on deciphering the multidimensional significance of hybrid and theriomorphic, divine and demonic entities of Egyptian origin, depicted on imported artifacts and locally made objects. The figures on the objects are studied in regards to their geographical distribution, their relationship with the archaeological environment, their integration into the wider socio-political context of each region and the diverse network of direct or indirect commercial and cultural contacts of each site with Egypt. The synthesis of these data indicates that certain elements of Egyptian theology and magic had penetrated the Greek cultic context, particularly in areas of Eastern Aegean. Moreover, the comparative study of specific Egyptian figures and Greek demonic entities indicates the impact of Egyptian iconography and symbolism in some cases, while it also enables the interpretation of conceptual differences in others. The exploration of the multi-leveled adaptation of Egyptian religious symbols within the Aegean suggests that the basic elements for the religious syncretism of the Hellenistic times were already evident in the Archaic period.