Itrerpretation of pharaonic Egyptian figures: Contributing to the study of human attitudes and movements. 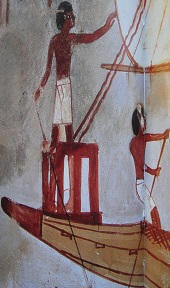 “The body as a subject is endless and it invites strikingly different approaches, since it is at the same time a basic, intimate and unchanging reality.”

These are the words repeated by my professor at the University of Crete, Dr. Iris Tzahili, when I was still a postgraduate student in prehistoric archeology and attended her valuable seminar lessons. These phrases were the starting point and the catalyst for making me interest and direct my study and thought to the relatively recent field of body archeology. My strong interest in this field was concentrated in Egypt, due to  the love for the culture and findings of this area, but mainly because of the strong encouragement given by my Professor, P. Kousoulis, to study phrases of Herodotus closely related to the Egyptian body and movement. I haven’t noticed the kinesiological dimension of phrases like “προσαγορεύειν ἀλλήλους ἐν τῇσι ὁδοῖσι προσκυνέουσι κατιέντες μέχρι τοῦ γούνατος τήν χεῖρα”, which underline the peculiarity  of  Egyptians’ physical behavior and at the same time contribute to the re-interpretation of Egyptian depictions of bodies not as highly static, but rather highly kinetic. Since then, I have realized that this subject is appropriate for being a doctoral thesis, without denying the fact that I am entering a world beyond our understanding.

The recognition of the particular value that Egyptian culture attaches to the human body may sound common, but this is not the case with the kinesiology and its semantics, whose exploration was sporadic, fragmentary, minimal, and therefore not common. In this PhD dissertation my interest focuses on the applied practices of different activities as well as on the body postures and movements associated with them.  An attempt has been made to investigate the “reading” of Egyptian body and how the presentation of the body reflects thought and mind. The selected characteristic iconographical forms serve as a model leading to interpretative kinesiological approaches and related conclusions. At the same time, the conclusions are related to the kinesiological perception of the body by Egyptians. The peculiarity of this doctoral thesis and its significant contribution and value lies in the fact that the body is approached not as a biological-bone entity, but as a culturally constructed “text” incorporating meanings and social connotations.

Since the “introverted” Egyptian body with its movements and attitudes is regarded as a signal for deciphering, it is mainly approached as a cultural phenomenon. Physically recorded social meanings, values and practices may recall natural intentions constituting Egypt’s ethos. Body expression reflects Egypt’s social reality with its rules and conventions, which has been implemented, incorporated and transformed into a well established attitude.

Despite the figurative proximity to Egyptian body, which is extremely helpful for decoding, reconstruction, and kinesiological perception, the topic of the dissertation was almost uncharted, and therefore including a number of difficulties, both theoretical and practical. But these difficulties were just the motivation.The attempt to interpret, trace and identify Egyptian body and movement remains incomplete and mutilated, which is due not only to the material and the concentrated character of this thesis, but due to the fact that no distinctive body attitude is considered genuine, representative and decisive for the absolute correct approach and interpretation. There is plausible that meanings of Egyptian practices are doubtful or contradictory and have no universal validity. But this difficulty does not undermine further synthetic investigation on the subject, an almost endless problematic, which is ultimately the most genuine approach.

My aim and my main focus were to categorize, interpret and designate the logic behind Egyptian kinesiology, as can be reflected from the iconographical material. A logic that reveals, although abruptly, the non-wordy element of the widely applied body language. By studying available evidence, an attempt was made to trace possible reasons for choosing specific attitudes and movements.

Egyptian body, mainly through stillness of burial iconography, silent body language and its “muted” eloquence, seems to be able to reveal thoughts, intentions, passions, desires, feelings, habits, behaviors, and even character traits. The content of the information that Egyptian body reveals is broad, because it serves as a transmitter of signals and signs not always expressed through the language. The signals of Egyptian body often precede the speech. The expressive body language, due to its immediate visualized perception, works either as a complement to the relation between image and speech, or independently from the meaning of words. The close connection of Egyptian body with its visual and verbal rendering makes it a powerful carrier of various concepts ultimately revealing significant aspects of Egyptian culture.