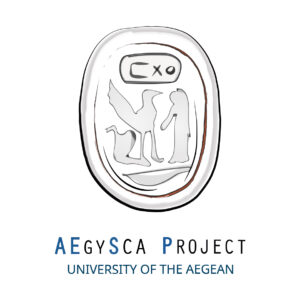 Aegyptiaca as indicators of religious and cultural interaction in the Southeastern Mediterranean: The multiple implications of Egyptian and Egyptianizing scarabs in the Aegean (8th-6th century BC)

The Mediterranean region is a complex mosaic of different population groups and cultural identities, linked through various communication networks. In the Early Iron Age, objects, motifs and ideas of social and religious content from the Near East and Egypt are spread throughout the Aegean as a result of reactivation of commercial and cultural contacts, after the end of the Bronze Age.  Since religion is an intrinsic element of cultural identity, comprehension of the interplay between religious artifacts, images and ideas is vital in order decipher cultural interconnection. The study of interaction between Egypt and Greece in the area of religious ideology, magic and popular cult has been overshadowed by the undisputed influence of Near Eastern art and thought on the Greek world in the Archaic period, which has been thoroughly analyzed. This is evident mostly in the significant diffusion of Egyptian and Egyptianizing objects (i.e. scarabs, amulets, vessels, etc), known as Aegyptiaca. The most rich category of Aegyptiaca includes scarabs, scaraboids and seals, which may have not only imported but also reproduced in local workshops. From the middle of the seventh and during the sixth century BC, Egyptianizing objects of mixed style – vessels, anthropomorphic and zoomorphic figurines and amulets- were manufactured in a faience workshop, most likely established on Rhodes with the contribution of Phoenician craftsmen. Previous scholarship, based only on typology, states that a special category of scarabs, known in the bibliography as “Lindos-Perachora” or “Rhodes-Perachora” may also have been manufactured on the same island – from the latter half of the eighth century BC to the first quarter of the seventh century BC. However, traces of processing (molds, discarded, waste, etc) of a workshop have not been found on the island, and the predominant theory about the production of these scarabs in Rhodes is based in the strong assumption that there was a workshop there, as shown by the thorough typological study of Egyptianizing by V. Webb. Even though, the largest assemblage concerning number and variety of this type of scarabs has not been found in Rhodes- although Lindos assemblage is very significant- but in the votive deposit of Perachora. The existence of many series of almost identical pieces is a crucial element requiring further investigation, since it could indicate the existence of a workshop there or nearby. The project will reinvestigate the typology and archaeological context of scarabs from Perachora, Heraion of Argos, Ialysos and Lindos, in order to shed more light to these significant questions.  Since scarabs are the largest category of Aegyptiaca in the Aegean, they can be used as a very representative sample for a thorough interpretation of the complete corpus, promoting future research in this field.

A significant part of the AEgySca Project is based on the study of scarabs and scaraboids from Perachora and Argos. We would like to express our sincere gratitude to the National Archaeological Museum for the permission to study and publish pictures of this material in the upcoming database. We wish to thank Dr. A. V. Karapanagiotou, current Director of the Museum, Dr. M. Lagogianni, former Director of the Museum and Dr. G. Kavvadias, Head of the Department of Vases, Metalwork and Minor Arts Collections for their invaluable support. Special thanks go to Dr. M. Chidiroglou, archaeologist and curator of the same Department, for her kind assistance all along the process, her patience and her insightful remarks.

We are also very grateful to the Ephorate of Antiquities of Dodecanese for the permission to publish pictures of Egyptian and Egyptianizing material from Camirus and Ialysus, housed in the Archaeological Museum of Rhodes.  Special thanks go to Dr. Maria Michailidiou, Director of the Ephorate and the archaeologists Charoula Fantaoutsaki and Evangelia Dima for their continuous support.

We are especially thankful to the photographer Anastasia Michail for photographing and editing the images of the project.

Funding: This research is co-financed by Greece and the European Union (European Social Fund- ESF) through the Operational Programme “Human Resources Development, Education and Lifelong Learning 2014-2020” in the context of the project “Aegyptiaca as indicators of religious and cultural interaction in the Southeastern Mediterranean: The multiple implications of Egyptian and Egyptianizing scarabs in the Aegean (8th-6th century BC)” (MIS 50049415)